"Form follows function" - that means no unnecessary decoration, no ornate embellishments. But how does this motto affect web design today? Influenced by Bauhaus, the motto is an expression of a radical idea of pure functionality. Bauhaus and Deutscher Werkbund set themselves the goal of educating people to "good form". It was all about the simplicity of things: "Less is more" - less is sometimes more. But less is sometimes also boring.

There are certain design guidelines that are generally adhered to. But only those who know the rules can break them. No, he should even break them from time to time. Because if it were just about functionality, the world would blur into a boring uniformity. Everyone still knows this one buzzkill from school days, who compulsively followed all the rules and hoped to gain prestige that way. The favor of the girls, on the other hand, went to the one who sometimes rebelled against authority and rules. The rule-abiding milksop lives by the motto "form follows function." He gets through his life, which is characterized by mediocrity, well and without much excitement. But only those who are also courageous sometimes land the big coup! This does not mean that every rebel should immediately call for a revolution. Applied to the topic of web design, it means that good web design is always a symbiosis of function and aesthetics, a fusion. Not to say "sex for the eye." But that doesn't do it justice: good web design appeals to different senses and creates an experience that can't be achieved with plain minimalism.

In web design, the focus is on people and their needs. Nowadays, people do not merely consume, but also communicate and interact. Web surfing, mobile shopping, etc. are expressions of give-and-take. Online merchants make their money on the Web. Users want a unique shopping experience in return. Design today is no longer just about making something pretty. It's about designing concepts and strategies. It's not just the look that counts, but the experience that is created and the feelings that are associated with it that are remembered. Good web design speaks to the heart and the brain.

To retain website visitors or customers in the long term, familiar preferences must not be disregarded. One usability orgasm follows the next, but the user doesn't feel at ease? To prevent this, the wheel doesn't have to be completely reinvented. There are certain conventions such as reading direction, page layout and familiar icons that users are familiar with because they have "grown up" with them. The floppy disk as an icon for saving, for example, is common and is still used, even though it has long been outdated. Instead of being a trivial accessory, graphics support or explain the function and follow the goal of the web page.

Good web design is not a matter for a one-night stand that follows fleeting trends at will. But just as little you have to be satisfied with conventional flowery sex. There is plenty of room in between, just waiting to be passionately conquered by web designers and developers. As with an interpersonal relationship, the body or shell (i.e. the functionality of the website) isn't worth much without the soul (concept and aesthetics) to bring it to life.

How to create your web store design

In online stores, the merchandise cannot be touched like in brick-and-mortar stores. With purposeful webshop design, this supposed weakness is transformed into a strength. Mobile shopping and responsive design - technical developments and the expectations of the target group pose challenges that need to be mastered. In our checklist, we reveal how successful webshop design can be implemented and what needs to be taken into account. 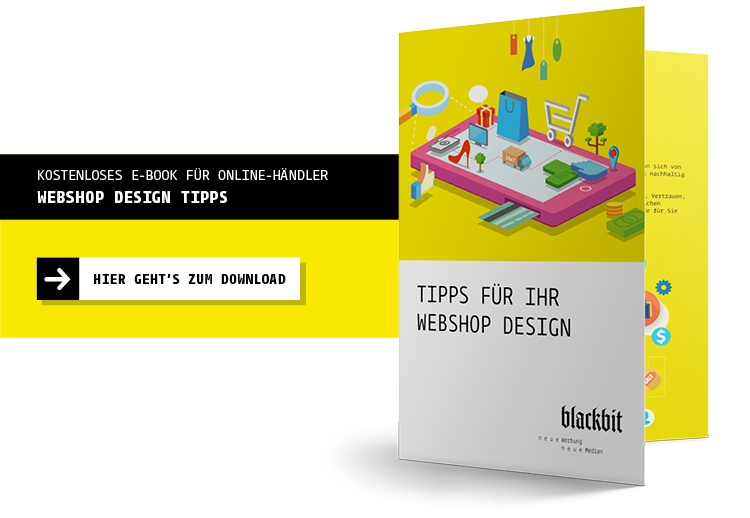